Because fire facilitates stiltgrass growth and spread, land managers should consider removing encroaching stiltgrass prior to using prescribed fire as a management tool, or avoid the use of fire in areas where stiltgrass has invaded.

This study investigated the interaction between prescribed fire and a warm season annual grass that is aggressively invading deciduous forests in at least 28 eastern U.S. states. Of Asian origin, Microstegium vimineum (Trin.) A. Camus, or stiltgrass, often colonizes disturbed areas, though it also tolerates low light conditions and thus can thrive in mature, closed-canopy forests. It can stifle native tree seedlings and suppress native herbaceous plants.

While interactions between fire and nonnative grasses have been studied in arid  ecosystems (see Brooks et al. 2004), such investigations have been rare in mesic systems. The researchers experimented on a landscape scale to  interactions between fire and stiltgrass in an eastern U.S. temperate deciduous forest, and to assess the impact of these interactions on tree regeneration. In particular, they wanted to determine if fires in invaded areas had higher levels of intensity.

During 2009 and 2010, the researchers applied large-scale prescribed fires to invaded and uninvaded forest stands that contained natural tree regeneration and that also had been planted with native tree seedlings. They measured fire intensity and later evaluated survival and growth of tree seedlings and stiltgrass.

The study took place in the 20,647-hectare Big Oaks National Wildlife Refuge (BONWR) in southeastern Indiana, of which some 800 hectares have been invaded by stiltgrass. The research sites were in mixed deciduous mesic forests that were either mature or intermediate age, and were dominated by American beech (Fagus grandifolia), oaks (Quercus spp.), red maple (Acer rubrum), black walnut (Juglans nigra), sweet gum (Liquidambar styraciflua), tulip tree (Liriodendron tulipifera), and sycamore (Platanus occidentalis). In the understory, dominant plants included spicebush (Lindera benzoin), viburnum (viburnum spp.), and greenbrier (Smilax spp.). These sites had previously been disturbed by humans, either through prescribed fires or timber harvests. Fire continues to be used at BONWR as a tool to promote oak regeneration and to keep savanna areas  open.

The researchers’ methods involved  setting up four types of plots: invaded and  burned; invaded but unburned; uninvaded  and burned; and uninvaded and unburned.  All plots were established in areas with similar topographic characteristics and  plant communities. Invaded plots had at  least 75% cover of stiltgrass and control plots had less than 10%. To provide comparable weather and fuel moisture conditions, at least one invaded and one uninvaded plots were burned at any given time.

Researchers planted hundreds of nursery-grown native seedlings, including red maple, tulip tree, and three oak species (Quercus alba, Q. velutina, and Q. macrocarpa). Locations and numbers of tree seedlings for both naturally sprouted and planted seedlings were recorded prior to and throughout the experiment.

In both the control plots and the invaded plots, researchers assessed characteristics of fine fuel loads immediately prior to each fire by collecting and weighing grass and other fine fuels (biomass < 2 cm diameter) and by measuring moisture content.

During each fire, researchers recorded four key indicators of fire intensity: flame height, the percentage of area burned, the maximum temperature, and the number of seconds that a fire was hotter than 300°C, which is a typical average peak fire temperature in uninvaded eastern U.S. oak forests. The amount of time a tree stem is exposed to flame and heat is an important factor in its survival.

Chart is reprinted with permission. It originally appeared in Journal of Applied Ecology, 52, 992-1000. © 2015 by British Ecological Society.

Among the study’s results was an unexpected finding. Prior to setting the prescribed fires, researchers did not find any difference in the fine fuel loads either in weight or moisture content between uninvaded and invaded plots.

Despite this lack of difference, and in keeping with researchers’ predictions, fires were significantly more intense in plots invaded by stiltgrass than in control plots, for three of the four key indicators. Flames rose 160% higher; the maximum temperature was 80% hotter; and fires remained at or above 300°C for 175% longer. However, the percentage of burned area was not significantly larger in invaded plots.

Fire is used to promote oak dominance because oak seedlings can survive hotter fire temperatures than many other tree species (see Arthur et al. 2012 for more on this point). Consistent with prior findings, in this study fire had no effect on oak seedling survival in uninvaded areas; however, oak survival significantly decreased in burned stiltgrass-invaded areas, due to increased fire temperatures and duration. Seedlings of other species also died in large numbers in these plots.

Not only did fire in stiltgrass-infested areas burn hotter and kill more tree seedlings, but fire also appears to promote vigor in the stiltgrass itself. In burned plots, stiltgrass biomass measured the same in consecutive years, despite the removal of biomass due to the fire. However, in unburned invaded areas, stiltgrass biomass decreased by 57% during those same years.

While the study did not investigate the mechanism by which stiltgrass leads to hotter fires, the researchers speculated that the extra heat may be caused by the plant’s physical characteristics rather than by either the quality or quantity of fuel, particularly because stiltgrass leaves have been shown to produce a comparatively low amount of heat when burned. One possible explanation for the hotter fires may be that the plant’s stems do not decompose quickly, which could create a fuel bed structure that allows air to flow more freely than it does through fuel beds composed of native plants.

As for the unburned plots, there was no difference between invaded and uninvaded areas in the survival rate of tree seedlings, whether naturally occurring or planted. However, in plots with stiltgrass invasions, the average number of tree seedlings that had naturally colonized the plot was 66 % less than in uninvaded plots.

In light of projections that climate change will increase fire frequency in areas currently invaded by stiltgrass, and the increasing amount of land undergoing prescribed fire management, the potential exists for exacerbating the interaction between fire and this rapidly expanding invasive grass. The authors say this could have important implications for forest biodiversity and they suggest that forest managers avoid application of prescribed fires in invaded areas until stiltgrass has been removed, preferably with a grass specific herbicide.

In summary, this study demonstrated that fire can interact with an invasive grass in temperate deciduous forests and have significant consequences by burning hotter and killing tree seedlings that otherwise survive fires, thereby creating a positive feedback loop that further promotes the invasive plant.

The Oak Woodlands and Forests Fire Consortium seeks to provide fire science to resource managers, land-owners and the public about the use, application, and effects of fire in the region. www.oakfirescience.com

This research brief was funded by The Joint Fire Science Program. www.firescience.gov

LINK TO ANOTHER EXCHANGE 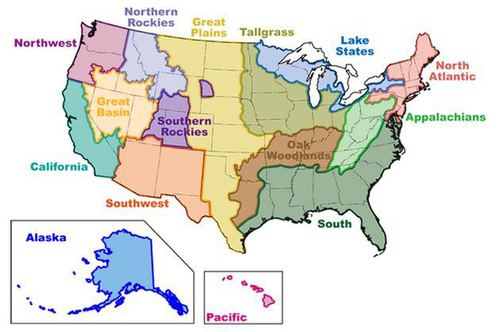